NAS4Free is described as “an embedded Open Source NAS distribution based on FreeBSD (a Unix-like operating system). It supports sharing across multiple operating systems, including Windows, Apple, and [other] UNIX-like systems.” NAS4Free touts its benefits as including frequent updates and having a Full Web Management Interface (WebGUI).

Some critics say the installation process is confusing and far less clear as compared to open source competitor FreeNAS, but still others say NAS4Free is based on a newer version of FreeBSD than FreeNAS, making it the better option of the two. In theory, the newer version of FreeBSD is more stable than previous versions, so NAS4Free should be more stable than FreeNAS; however, most users cannot tell any measurable difference between the two in terms of overall performance.

NAS4Free has its own technical wiki as well as user forums where most users will find the tech support and tips they need. 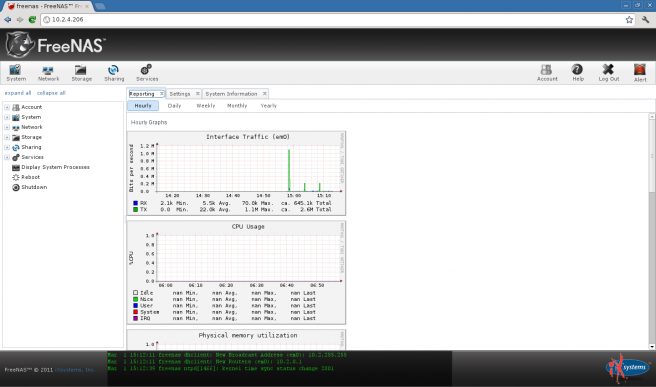 Not to be confused with the similarly named NAS4Free, FreeNAS describes itself as “the only full time development team dedicated to bringing you the most potent and rock solid open NAS software” ever, and the massive amount of resources poured into developing this NAS shows. The website and the NAS interface itself have the polished look of a service that has been honed for years by professionals. FreeNAS describes itself thus:

“FreeNAS is an operating system that can be installed on virtually any hardware platform to share computer data storage over a computer network. ‘Free’ as in ‘free and open source’ and ‘NAS’ as in ‘network-attached storage’, FreeNAS is the simplest way to create a centralized and easily-accessible home for your data.

“The FreeNAS project and software were founded in 2005 on the principle that network storage be made available to the world at no cost and unencumbered by license restrictions. The FreeNAS Project has a mature community and a team of developers dedicated to meeting that goal and providing the best (open-source) network file storage solution in the world.”

FreeNas features include but are not limited to local and remote backups, substantial data protection, encryption, the ability to take file system snapshots, simplified file sharing and a wide variety of plugins.

Benefits of FreeNAS include its longevity (which equates to stability and trustworthiness), ample user documentation and easy to understand technical support, a familiar looking user interface (for a short learning curve), and, quite frankly, its professionalism. This is an open source NAS solution you won’t be ashamed to use.

Amahi is an international NAS solution used in 35 nations that is marketed towards consumers and individuals as opposed to corporations, systems developers, IT professionals and groups. Amahi calls itself a “powerful, simple home server” and describes itself thus:

“Amahi is software that runs on a dedicated PC as a central computer for your home. It handles your entertainment, storage, and computing needs. You can store, organize and deliver your recorded TV shows, videos and music to media devices in your network. Share them locally or safely around the world. And it’s expandable with a multitude of one-click install apps.”

From this description you can see the emphasis is on managing personal multimedia assets as opposed to managing all of the data assets of an entire professional or scientific organization, so Amahi is geared towards non-technical types who want their network storage needs simplified.

Although Amahi is not particularly suited to the more sophisticated needs of businesses or professionals, it is a capable product for individuals, households and families who will appreciate its detailed instructions and easy on-screen commands, and as such Amahi fills a particular market need.

OpenMediaVault describes itself as “the next generation network attached storage (NAS) solution based on Debian Linux. It contains services like SSH, (S)FTP, SMB/CIFS, DAAP media server, RSync, BitTorrent client and many more. Thanks to the modular design of the framework it can be enhanced via plugins.

“OpenMediaVault is primarily designed to be used in home environments or small home offices, but is not limited to those scenarios. It is a simple and easy to use out-of-the-box solution that will allow everyone to install and administrate a Network Attached Storage without deeper knowledge.”

Although OpenMediaVault sounds promising from this description, it is not nearly as easy to use as Amahi when it comes to helping a complete novice set up his or her NAS for the first time. The support site is cluttered, and even though the organization behind this solution claims the interfaces are “simple and intuitive,” they will not be clear at all for individuals without a systems development background.

OpenMediaVault is definitely better for Information Technology professionals to use as opposed to general consumers; however, IT personnel will likely be drawn more towards FreeNAS, which seems to be documented better and be far more organized in terms of its user support and interfaces.

After reviewing these four offerings, we have concluded that the best open source NAS should really be separated into two categories: novice and professional. If you are an individual consumer with a limited computing background, go straight to Amahi which was designed with you in mind. If you are an Information Technology professional who is comfortable with installing and using open source solutions, you will most likely prefer FreeNAS, which is indeed as robust and as rock solid as its developers claim it is. Some of the other open source NAS might possibly offer more features than FreeNAS; however, FreeNAS seems far more stable, professional and organized than many of the other NAS options out there.

Looking for NAS hardware? Check out latest deals of NAS systems in Amazon!